There are a ton of different treatments on the market to treat acne including salicylic acid, retinols, antibiotics, lasers, even Accutane and yet, even with all those options available, some of us just can’t seem to get clear skin. I was one of those people, at 35 years old, I had been struggling to get my acne under control since my teens. Its one of the reasons I got into esthetics in the first place. I feel like I had tried every possible treatment with not one of them providing a lasting result. It was a very frustrating process and even more embarrassing thing because let’s be real, who wants to have their skin treated by a person who has bad skin herself.

As an esthetician I have had access to the best skincare products, top tier spas with facials designed to remedy breakouts and an arsenals of lasers, but they had done zilch to help my skin. Even if I found some relief, eventually the acne would come back and sometimes with a vengeance. I was lucky enough to find a plastic surgeon, Dr. Diane Bowen, who offers non-surgical aesthetic treatments including a treatment called Fractora by Inmode, she swore this was a game changer for patients with mild to moderate acne and acne scarring. The pictures below are provided by Inmode Aesthetics and are used in this article to show some before and after results from people who where treated in medical spa settings using Fractora.

Fractora is a fractional rejuvenation and resurfacing treatment that reduces wrinkles, restores skin tone and texture. It is a minimally invasive procedure that combines microneedling with radio frequency. By combining these two treatments together, it makes Fractora different you’re your run-of-the-mill microneedling treatment. Fractora is using micro pins to puncture the skin allowing the radio frequency energy, or heat, to penetrate deep into the skin, causing the body to generate new collage and elastin, and for acne patients the shrinking of the sebaceous gland, where oil or sebum in produced. 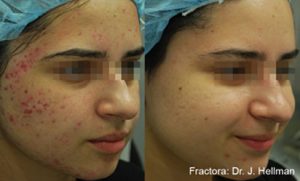 Fractora was introduced in 2011 and was not designed primarily to target acne. Fractora’s main application was for tightening the skin and reducing wrinkles by increasing the collagen production. It was later discovered that this combination of radio frequency with microneeding had a significant impact on active acne (current breakouts) and on acne scarring. While on its own, microneedling in-office treatments help with collagen production, it’s the inclusion of radio frequency that makes this a game changer! The depth of penetration with the heat (radio frequency) puts the collagen and elastin production on steroids. Its far more effective and safer than the at-home devices as well. If unsure if Fractora is the right treatment option for you, its best to have a consultation with a plastic surgeon.

Prior to my visit, I switched to a gentle skincare regimen without “active ingredients” like glycolic or retinol for 3 days. No acne medication, fish oil, blood thinners or ibuprofen either. Topical numbing cream was applied to my face and neck. I was also given a Valium to help keep me calm. By the way, did I mention that I have an awful fear of needles?! Yeah, like panic attack, excessive sweating, get dizzy kind of scared. Thankfully the staff at Golden Isles Center for Plastic Surgery was very understanding and reassuring to me. I just kept repeating the mantra of “I will have clear skin” in my head over and over so that helped. I got to relax to some spa music while I waited for the cream and meds to kick in. If you want this would be a good time to catch up on some kindle reading or that latest podcast you have been dying to hear. 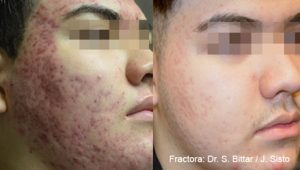 The treatment itself was not pleasant but it also wasn’t the worst pain felt. On a scale of 1 to 10 I would say I was at 4-6. The handpiece has 24 micro pins and it is pressed firmly into the skin, during each press a pulse of radio frequency is released below the surface of the skin. I just kept repeating the mantra to myself of “no pain, no gain, I got my big girl britches on, I can do this.” After the first pass, I thought I was in the clear and felt like I had climbed mount Everest, only to be told they were going to do a second pass. The reason for the double pass is to ensure the various trouble areas are covered and that the sebaceous glands are being targeted.

Immediately after I felt like I had wind burn, it looked rosy, and felt hot. It was explained to me that the redness and heat was a good thing, it’s the body’s inflammation response and inflammation is what causes the new collagen and elastin to form. I was given post care instruction, which included using a thin layer A&D ointment on my skin for the next 24 hours and for one week to use the gentle skincare regimen. At the two-week mark is when I could resume my normal skincare regime of retinol and glycolic.

When I woke up the redness was gone. It was a little tender to the touch, kind of like if you had a sun burn but you couldn’t see a physical burn. I had some swelling under my eyes, like when my allergies are in full swing. There was no pain or discomfort. My skin felt rough like sandpaper to the touch, which was all the little micro channels that were created from the handpiece scabbing over and starting to heal. I had some itchiness on my neck that I used hydrocortisone cream for. I kept my skin hydrated with the A&D ointment for the next 2 days.

For the next week it was much of the same, redness was gone, swelling went down, and each day the sandpaper feel was diminishing. For about 2 weeks’ time my skin was purging and caused some breakouts, for me it was exciting to see all the nastiness coming up and out but I can see how for most normal folks this would be upsetting and discouraging which is why I mention it. The purge is normal. By this point I needed to exfoliate my skin in the worst way. It was like the need to scratch an itch. At the two weeks mark I used a gentle granular exfoliant and scrubbed (gently) my face. It felt so good to get the last of that sandpaper feel off. I began using my glycolic wash and retinol night cream which helped with the purge that was happening. One thing that surprised me was the need for moisturizer. My skin has always been oily but for once it needed moisture. I used a lightweight hydrating serum to help satisfy the quench. At this point the mantra became “it has to get worse before it gets better” but I was starting to see the light at the end of the tunnel.

Once more into the fire

As if the torture the first time wasn’t enough, I went back for a second round. What can I say, I’m a glutton for punishment, or maybe just desperate for flawless skin that is acne free? The reality is that with non-invasive procedures like Fractora often multiple treatments are required to get optimum results. Sometimes even a combination of various treatments like laser and peels will need to be combined with the Fractora. For this portion the mantra is “it’s a marathon not a sprint.”

Is this real life or am I dreaming?

Again, I experienced the sandpaper and purging but by the end of week 2, something shifted, and I was out of the tunnel. By week 4 my skin was clear, healthy and glowing. I was shocked! As the months progressed my skin continued to be clear and beautiful. I also saw a reduction in my acne scars on my cheeks by about 50%. This was a game changer for me. It helped boost my confidence, I didn’t feel like I needed to wear a ton of foundation or pull a ball cap down to hide behind. I finally didn’t feel like a fraud when I said I was an esthetician and could help another person with their skin. 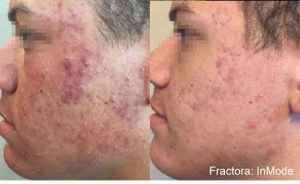 Other points to mention

The cost is not cheap, but it won’t break the bank. Typically, you are looking at spending anywhere from $1000-$2500 for a series of 3 treatments depending on the treatment area. Did I mention this can be used on stretch marks or the crappie skin above the knees? But when you add up all the years’ worth of stuff you have tried and that has failed you, I would have gladly paid the $2500 about 5 years ago and skipped all the other stuff. I also plan to do a maintenance treatment about once a year to keep the collagen production going, might as well fight the next phase of wrinkles before they even begin.

Fractora is worth every penny and even the little bit of discomfort. The number of ineffective products and treatments I have tried over the last 10 years easily adds up to thousands of dollars, not to mention the emotional toll acne has taken on my life. Its hard to put a price tag on being able to look someone in the eye while talking about their skin or being able to leave the house without foundation on. My mantra has resulted with “the journey is just as beautiful as the destination.”